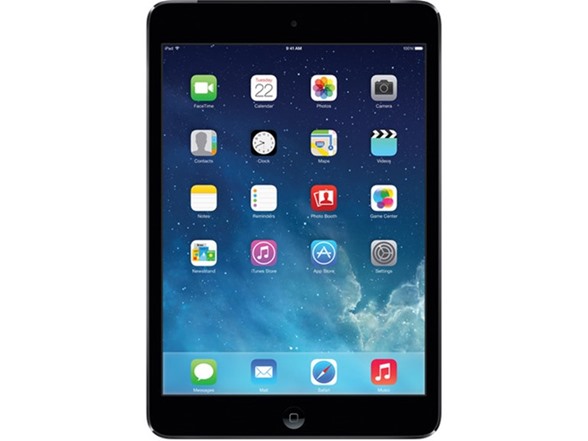 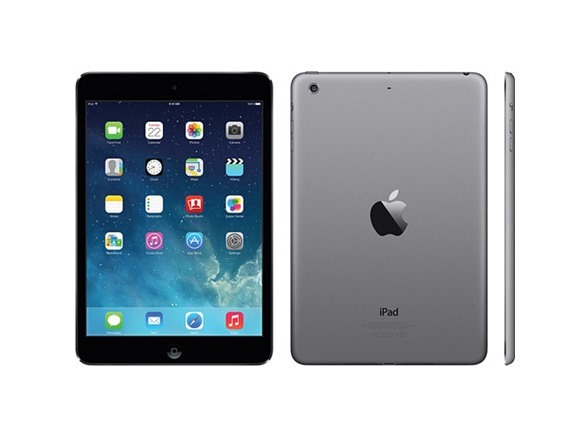 The Retina Display provides 4 times more pixels and 44% greater color saturation than the iPad 2. Within the 7.9" LED-backlit touchscreen, the 2048 x 1536 native resolution render text and images at 326 pixels per inch and a total of over 3.1 million pixels. The display also features a fingerprint-resistant oleophobic coating for increased resolution during use

Thanks to the A7 chip, apps run faster on the iPad mini 2. Games are more responsive and everything you do with the iPad mini 2 feels quicker. It's up to four times quicker than the previous-generation iPad mini 2. It also supports OpenGL ES version 3.0, enabling detailed graphics and visual effects once only possible on desktop computers and game consoles. And the A7 chip features 64-bit architecture, opening the door for even more robust and powerful apps

The iPad mini 2 was designed to be on the move. That's why the M7 coprocessor measures motion from your iPad mini 2 by pulling data from the accelerometer, gyroscope, and compass. This allows your apps to give you a better experience based on the movement of your iPad mini 2. It's a task that would normally fall to the A7 chip. But M7 is more efficient at it, which saves on power and opens up the A7 chip to focus on other tasks

With twice the Wi-Fi performance, thanks to two antennas and MIMO (multiple-input multiple-output) technology, the iPad mini 2 can reach download speeds of up to 300 Mbps. With dual-band (2.4GHz and 5GHz) 802.11n Wi-Fi and MIMO, that's double the data rate of the previous-generation iPad mini 2. So now when you want to download a movie, share photos or documents with AirDrop, or just browse the web, your connection is even faster than before

Sometimes it's nice to put a face to the conversation. And with FaceTime video calls on the iPad mini 2, your conversations look better than before. Make a video call over Wi-Fi or cellular and see (or show) every expression on the beautiful display. Now the FaceTime HD camera features a next-generation backside illumination sensor with larger pixels, which brightens up all your FaceTime chats, selfies, and group Photo Booth shots, even in low-light situations

The 5-megapixel iSight camera on iPad mini 2 was designed to help you capture all of life's moments at a moment's notice. Use the Retina display as an easy viewfinder to frame the perfect shot. Quickly swipe between capturing stills or 1080p Full HD video. Every time you shoot, the image signal processor in the A7 chip works with the camera to make a ton of adjustments and deliver a great picture or video automatically

iCloud functions as a wireless service for you to keep all of your iOS & Mac devices in sync. You can also backup content to iCloud and restore to a previous backup from iCloud as well

Siri lets you use your voice to send messages, schedule meetings, check the latest scores, and more. Ask Siri to do things just by talking. Siri understands what you say, knows what you mean and even talks back